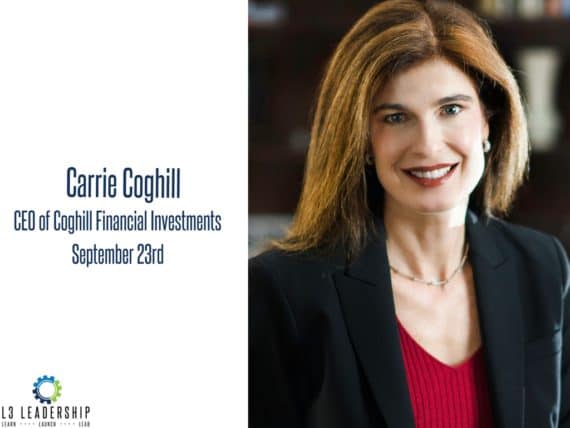 At this breakfast, Carrie will be sharing her best leadership content. You will also have an opportunity to ask Carrie questions and interact with her.

With a concentration on independent investment research and customized wealth management solutions, Carrie is continually recognized as one of the nation’s leading voices on financial advising.

Carrie has built an advisor team to execute global macro investing for clients, a process that serves as the hallmark of Coghill Investment Strategies. This process involves filtering global industry, economic, and academic research into a propriety system designed to analyze the impact on capital markets in order to identify increasing risks and new opportunities.

Prior to starting Coghill Investment Strategies, Carrie began her career in 1986 with Shearson Lehman Brothers and co‐founded D.B. Root & Company, a family wealth management firm in Pittsburgh. She has been honored by Forbes Magazine, Barron’s Magazine, Registered Rep Magazine, Wealth Manager Magazine and Pittsburgh Magazine as a top professional in her field, has authored two books, and is a regular contributor on CNBC, along with other local and national programs.

Carrie serves on the Board of Trustees for Robert Morris University as Vice‐chair and is the Chair of the Board of the Magee Women’s Research Institute and Foundation.

Additionally, Carrie brought the 2020 Women on Boards initiative to Pittsburgh in 2015, a national organization dedicated to increasing the percentage of female talent on

 Featured in the book The Winner’s Circle IV: Wealth Management Insights From