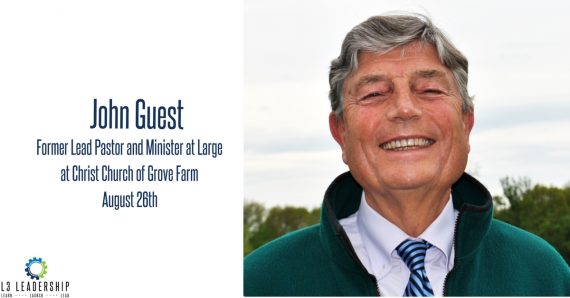 Dr. Guest was born and raised in Oxford, England, “…just an ordinary lad from London,” as he describes himself. At the age of 18, while studying to be an engineer, he attended a Billy Graham crusade and committed his life to Christ. Shortly following his ordination, he moved to the United States as part of a Christian rock band, “The Exkursions.”

He began his ministry in Pittsburgh nearly 40 years ago, serving as youth pastor and then, shortly thereafter, as senior pastor and rector of Sewickley’s St. Stephens Episcopal Church for more than 20 years.

As co-founder of Trinity Episcopal School for Ministry (TESM), Guest had the opportunity to influence the Episcopal Diocese in Pittsburgh. During a very turbulent time in the Episcopal Church, he held firmly to conservative Biblical values and helped to establish a reforming influence nationwide.

Guest has authored 10 books on the Christian lifestyle.

He also participated in the Lausanne Committee on World Evangelism and co-founded the South American Missionary Society. Additionally, he helped found the Coalition for Christian Outreach (CCO), a ministry designed to support and equip young Christian college students. That organization stills exists today, reaching out to more than 84 colleges in Pennsylvania, as well as several nearby states.