In this episode, you will hear Kevin Colbert, General Manager of the Pittsburgh Steelers talk about making tough decisions, earning your leadership, and his input on picking and developing talent. 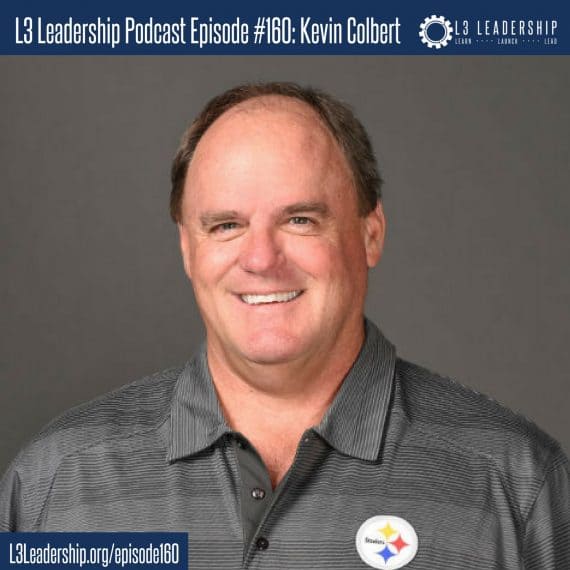 Kevin Colbert (born January 1957) is the general manager of the National Football League‘s Pittsburgh Steelers since the start of 2000. He is widely credited with putting together the Super Bowl XL and the Super Bowl XLIII teams in Pittsburgh along with owner Dan Rooney, president Art Rooney II, and coaches Bill Cowher and Mike Tomlin.

A Pittsburgh native, Colbert grew up not far from Heinz Field on the city’s North Side and attended North Catholic High School and Robert Morris University. Colbert has experience in coaching and managing teams in baseball and basketball alongside his primary sport football. After graduating from Robert Morris University in 1979, he served as a graduate assistant coach on Robert Morris’s basketball team from 1979-1981 and also was the head coach of the baseball team in 1981. In 1981, Colbert moved to Ohio Wesleyan University to be their backfield coach and recruiting coordinator from 1981-1983, and served as the school’s head baseball coach in 1984.

In 1984, Colbert joined the BLESTO Scouting Organization and from there was hired by the Miami Dolphins as a college scout from 1985-1989. Colbert joined the Detroit Lions as the Pro Scouting Director in 1990, where he was responsible for scouting players at the pro level (the NFL, the NFL Europe League, and the Canadian Football League as well as assisting with college player evaluation. He joined the Pittsburgh Steelers in 2000 as the Director of Football Operations, assisting in the assembly of two Super Bowl winning teams. In 2010, Colbert was named the Steelers’ first ever general manager and was placed in charge of player transactions and acquisitions as the head executive in the Steelers organization.[1]

Colbert and his wife Janis have three children: Kacie, Jennifer, and Daniel as well as a granddaughter, Avery.