How to Handle Tough Transitions in our Lives

I believe that how you handle transitions in your life will determine whether or not you reach your potential.Click To Tweet 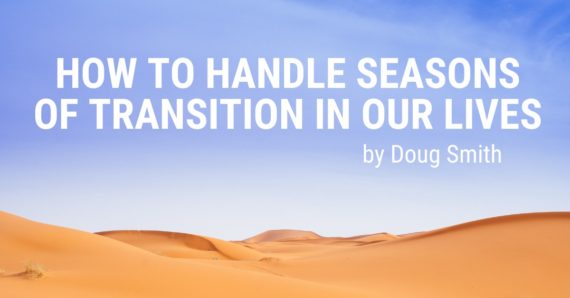 How to Handle Seasons of Transition in Our Lives

In his book, “Necessary Endings“, Henry Cloud said, “There are also the endings that are forced upon us, endings we do not choose but that we cannot work through very well either. As a result, we remain in pain or stuck, unable to pursue a new phase in life. These endings include divorce, being fired or laid off, the death of a loved one, the disintegration of a friendship, chronic illness, and so on. We do not choose these endings; they are thrust upon us by people we have trusted or sometimes by truly horrible events in life. If we are not prepared or have had too many losses before, these endings can render us broken, depressed, and floundering, sometimes for years.

I want to help you from losing years of your life to worry and bitterness.

In a season of transition in my life, I went through a 6 month period where I had a mid-life crisis. It was very tough. However, I learned that I was wasting my life trying to live in the past and fearing that I had no future. In the midst of that season, God taught me a lot, and it’s what He taught me that I want to share with you. If we were having coffee and you asked me about going through a hard transition, here is what I would tell you:

Sometimes to get us to move, God has to dry up the Well of our Current Season

When I was in a season of transition, this message by Carter Conlon at Times Square Church had a huge impact on me. He shared this scripture in I Kings 17:5-9: “So Elijah did as the Lord told him and camped beside Keith Brook, east of the Jordan. 6 The ravens brought him bread and meat each morning and evening, and he drank from the brook. 7 But after a while the brook dried up, for there was no rainfall anywhere in the land. 8 Then the Lord said to Elijah,9 “Go“.

Carter said, “Sometimes to get us to move, God has to dry up the well. These often aren’t pleasant times, but they are necessary because we’re all campers by nature.”

Seasons of transition can be uncomfortable, but when you look back, you’ll recognize that they were necessary. If you feel like you’re in a season where the well is drying up, pay attention to that. God could be preparing you for a transition. Don’t fear it. Don’t run from it. Embrace it.

Now, you may ask, I feel like the well is drying up in my current season, should I stay or go?

Be Open to Plot Twists in Your Story

My Pastor once told me, “Never Put a Period where God puts a comma.” In other words, never say things like, “I’m going to work here forever.” “I’m going to do this and then that.”

Part of the reason transitions can be so hard for us is because we become too confident and comfortable in our own plans for our lives.

I made this mistake. I was certain that I was going to be a youth pastor and then a senior pastor. So when I started working at a homeless shelter, I had an identity crisis. Little did I know that God wanted me to go into fundraising for a ministry that I knew nothing about. Looking back, I’m so glad God led me into a season of transition.

Plot twists are what make stories exciting. So the next time you’re going through a hard transition, just say, “Plot twist! I wonder what will happen in the next chapter!”

Do Not Get Bitter about Your Last Season

Whether it was a good transition or bad, it’s easy to get bitter about the last season of your life.

Don’t. It will be a waste of your time and energy.

If you are bitter, then you are not trusting that God has something better for you in the future.

Isaiah 26:3 says, “He will keep you in perfect peace whose eyes are fixed on Him!”If you don’t have peace, you’re not looking to Him.

Often times in a hard transition, we can get extremely bitter, especially if we were treated poorly (or if we think we were). Whether or not that is true, you must determine why you are in transition and really look inside and see if you were part of the problem.

This is where I see a ton of people miss it. They point the finger at others, but they never determine if they were part of the problem! Self-awareness is everything.

I’d encourage you to ask those in the last season of your life what you can do to grow and develop. Oftentimes, we have blind spots we don’t even know about and if we don’t learn to deal with them, we will carry them into the next season of our lives.

Ask God and others to show you what things you need to be working on so you can be more effective in the next season of your life.

Ask God and others to show you what things you need to be working on so you can be more effective in the next season of your life.Click To Tweet

Henry Cloud said, “When we fail to end things well, we are destined to repeat the mistakes that keep us from moving on.”

If you don’t learn the lessons you need to in the season you’re in now, you’ll have to learn them again in the next one! Trust me!

If you don't learn the lessons you need to in the season you're in now, you'll have to learn them again in the next one!Click To Tweet

In Seasons of Transition, You Find the Unhealthy Places You Were Finding Your Value

I’ve shared this often, but when I’ve had transitions in my life, I’ve found that I was finding way too much value in where I was and what I was doing.

As a result, when I was no longer where I was or doing what I was doing, I had an identity crisis because my worth and value were not found in the right place.

This is very dangerous. When you find your identity in anything you can lose, if you lose it, you’re in danger of having a crisis.

When you find your identity in anything you can lose, if you lose it, you’re in danger of having a crisis.Click To Tweet

Unfortunately, when people have an identity crisis, they tend to isolate themselves and run to things they shouldn’t run to in order to numb the pain. Please don’t do that. Find a community of people you can do life with. Get connected with a good Church and learn to find your value in God.

Success is not a Job, Success is Who You Are, Where You Are

I remember thinking that if I wasn’t on staff with a church, then I was not in ministry and could not be used by God.

That kind of thinking really hurt me in my season of transition. Thankfully, a mentor said this statement to me and it changed my life: “Ministry is not a job. Ministry is who you are, where you are.”

For those not in ministry, substitute the word ministry with success.

Success is not a job, it’s who you are, where you are.

Success is not a job, it's who you are, where you are.Click To Tweet

The reality is, you’re not successful or living a life of significance because of where you work. You’re successful simply because of who you are. Learn to define success correctly.

I love John Wooden’s definition: “Success is peace of mind which is a direct result of self-satisfaction in knowing you did your best to become the best you are capable of becoming.”

“Success is peace of mind which is a direct result of self-satisfaction in knowing you did your best to become the best you are capable of becoming.” -John WoodenClick To Tweet

If God’s Called You to do Something, He’s the Only One that Can take that Away

The opposite happened, I actually had more opportunities open up for me after my transition was over.

Your life is not over just because the last season of your life is.

Your life is not over just because the last season of your life is. Click To Tweet

God is Bigger than the Last Season of Your Life

When I was going through a 6-month identity crisis, my father-in-law kept telling me over and over again, “Doug, God is bigger than the last season of your life.”

God is bigger than that last season of your life!

God is bigger than the last season of your life.Click To Tweet

Be Grateful for the Last Season of Your Life

I remember one of my last days on staff at the organization I was a part of, a dad put his arm around me, pointed to all the students in the audience, and said, “See all these kids, you’re leaving your thumbprint on all of their lives. Everywhere they go, you’ll have had a part in their journey. Now go and do that everywhere you go.”

Light of Life wasn’t even on my radar when I was in a season of transition (10 years ago). I was looking for a job in business. In fact, I had a job lined up that I was going to start in a couple of weeks.

Then, out of nowhere, I got a call asking me to come and interview at Light of Life. I interviewed, got the job, and the rest is history. I did absolutely nothing to make that happen. God had a better plan for my life than I did.

I find great comfort in the fact that God cares more about where I end up than I do.

Trust Him that if you’ll put Him first, He’ll get you exactly where you need to go!

Soon, It will Be Better Than It’s Ever Been

‘“But forget all that— it is nothing compared to what I am going to do. For I am about to do something new. See, I have already begun! Do you not see it? I will make a pathway through the wilderness. I will create rivers in the dry wasteland.’ -Isaiah 43:18-19

I remember listening to a sermon and the Pastor saying, “Recently, people have been coming to ask you how you’re doing and you can’t even look them in the eye you’re in such a bad place. However, in not many days, people will come to you and ask you how you are doing and you’ll look back and them with a gleam in your eye and say, “It’s better than it’s ever been! Better than it’s ever been! Even at its best, it wasn’t this good!”

In not many days, you’ll be able to say the same thing.

Have you experienced seasons of transition? What did you learn?